Congratulations, everyone. We’ve made it!

March is finally here and the telltale signs of Spring are all around us. The rising temperatures, the chirping robins, my weirdo neighbor doing laps around the hood on his electric skateboard and the swimsuits being placed 2 feet from the entrance of Target remind us that it’s about to get springy up in here. That being said, someone really should let them know that putting those flimsy suits that close to the entrance is a great way to lose good, loyal, chubby customers like myself.

Spring just has a way of making us all feel a little better, doesn’t it? As a kid Spring brought the promise of outside recess and the chance to totally reinvent yourself during Spring photos, especially if the photos taken in the Fall didn’t exactly caption your true essence. Spring photos were special and they gave you the chance to be your best self and even better, gave you the opportunity to provide any prop that helped really drive that message home. For example, if you were a sporty girl, you could bring a basketball! A studious, yet edgy boy, you could bring a stack of Goosebumps books! But, if you were a bad ass with a bitchin’ haircut,  you’d wear a Pocahontas track suit and bring your Maltese with the worst grooming job this side of the Mississippi to really show the world that you’re here to tear things up. Not like I’m speaking from experience or anything. 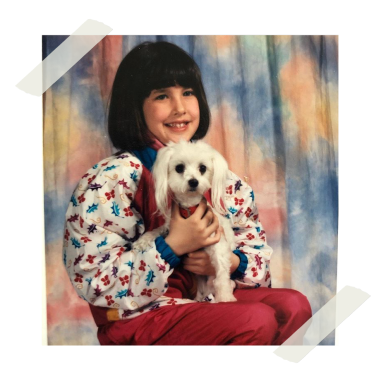 As an adult, it’s much more simple. The days are finally starting to get longer and I don’t know about you, but I’m about ready to put away the fleece, the flannel and the sweaters and go out lookin’ for some D! (Vitamin D, that is.) Speaking of…ahem…the D, I recently received a text from a lady who hosted one of THOSE parties which I attended back in college. For those of you who either aren’t good at math or are in as much denial as I am about my age, that’s been like 10 years ago. And for those of you who have no idea about the kind of shindig I’m referring to, I’m talking about a Pure Romance party. Basically, a network marketing situation that sells kinky stuff, like “toys” that require AAA batteries as well as flavored water based lubricants.

KY? Because we gotta!

Anyway, the text was something along the lines of “Hi Mackenzie, it’s “Sally” from Pure Romance! We are running a flash sale and I wondered if you needed to stock up on anything?!”. First of all, Sal, great job keeping that list of leads warm for 10+ years, I salute you. Second of all, I have two children under 2, have worn only full coverage undergarments for years and have a preferred bedtime of 8 pm, so no, I do not need to “stock up”, but thank you for asking! In fact, the only thing getting spanked tonight is my beloved Iowa Hawkeyes basketball team, and honestly, that’s just sad.

But, back to business. What was I rambling about? The weather? Oh yes, Spring! Take it from me, nothing can take away the bliss an early Spring day brings like the distant sound of f bombs being dropped by your husband as he tries his best to blindly assemble the brand new double stroller you just spent too much money on. If there are any single ladies reading this, please make sure you know how your man is going to behave while putting together furniture, strollers, or even toys from your Pure Romance parties before you let him put a ring on it. Could be a real deal breaker if you’re not careful. JUST KIDDING. Although he loses his shit here and there, my husband is one of the good ones and he puts up with a lot. Also, hi, have I introduced myself lately? My name is A lot. He takes care of the important stuff, like the bills and the taxes and even answers the doorbell when it rings, (although the jury is still out on whether or not that is a good quality or not). Can you believe that? The doorbell rings. He answers. Just like that! My brain almost can’t process it, especially because I have one hard and fast rule in my life, and that’s to never answer the doorbell when it rings. Why, you ask? Serial killers, that’s why.

My husband, or as I like to call him, Geoff, is a good guy. And although he’s an ISU fan and sometimes forgets I’m a beautiful goddess who deserves to be complimented every hour on the hour, he’s very responsible, very tall, very handsome and maybe most importantly, doesn’t judge me when he catches a glimpse of my nips after a good pump session, which is really saying something. We started officially dating a million years ago in the Spring, so this time of year always makes me reflect on just how far we’ve come. It’s like, really far.

His job does require quite a bit of traveling, which can be hard, but it makes it that much sweeter once he gets home, especially when he comes home bearing treats like Canadian candy bars (whatchu putting in your chocolate, Canada?!). You know that saying about absence making things grow harder? (Right??) Well, it’s true. I recently compared my behavior when he arrives home to that of a drunk college girl, doing stuff like yelling “YOU WANNNA EGG SANAWICH” from the kitchen while sipping wine and flirting with two other boys to make him super jealous. The boys are our sons, but still. I think it works.

I don’t know when this turned into a husband appreciation post, but somehow it did and I’m just going to roll with it. And not JUST because I want him to buy me new teeth when mine inevitably all fall out due to me not doing my research and starting Smile Direct Club without a care in the world, but because he’s a good man who works hard and loves his family harder. Maybe it’s the warmer weather or all the talk of raspberry flavored lube that’s got me feeling this way, but I’m just really glad I’ve got a man who is generous enough to share his airline points and life with me, and that’s that.

I have three kids! How am I supposed to remember ALL of their birthdates?!
A Holly Jolly Hot Mess, if you will…
Who else?!
I am pretty bad 💅🏼
Looking back I know mg mom wanted those crackers and she gave them to me anyway. Because that’s what moms do. They sacrifice their bodies, souls and crackers. Thanks, mom.
Focus? Who’s she?