Autumn is here. It’s here, and I could not be more excited. The colors, the smells, the layers, the carbs. Yep. Huge fan. And just as sure as the leaves will change from green to gold, I too will change…from average female to the most basic bitch you’ve ever met. It’s fine, really, I’m dealing.

Autumn reminds me of home. So, this weekend my little family and I packed up and headed to Southeast Iowa where I grew up. It was one of those weekends you want to last forever. No big events, no parades in my honor or anything, just a great weekend spent with family and lots of time outside.

We got home Friday night and hung out with my parents at their beautiful country home. The conversation only briefly turned to politics before my Dad shut it down sensing a family argument about to ensue. He’s a smart man. Mom made her famous chili. Seriously, she needs to get that stuff in some sort of contest, county fair or Food Network cook-off situation. Blue ribbon, Anthony Bourdain applause worthy stuff.

Saturday morning, Mom, Bash and I headed to What Cheer, Iowa for the World Famous Flea Market while the men folk went goose hunting. Yes, goose hunting. Honk, honk. Bash, by the way, is my dog. A Clumber Spaniel we adopted from Aheinz 57 in De Soto, Iowa. He’s probably the most handsome dog to ever exist. Ignore the fact that his red rocket pops out every time someone mentions the word “treat”, and he’d probably be voted most behaved, too. Anyway, if you’ve never been to this flea market, it’s a must. Vendors from all of the United States travel to What Cheer the first weekends of May, August and October to sell their treasures. “Treasures”, by the way is a very subjective word, and can mean anything from beautiful antique hutches, to used pink fuzzy slippers on the $1 table. It’s really quite something.

After leaving the market with a couple of prizes (mom scored some stools, and I grabbed a kitchen scale), we headed to my grandparent’s farm so I could snap some photos of the landscape before the corn was taken down for harvest. The gray/purple clouds that day were a nice contrast to the golden corn stalks, and it needed captured. So, I climbed my happy ass to the top of the grain bin and took some very professional shots with my camera (iPhone) and prepared myself to edit (Instagram – @koshiz, by the way). I don’t mean to brag, but I snapped a couple doozies.

Sunday was another mild day full of clouds and family. Before heading to my grandparent’s for Sunday dinner, which they host every Sunday, my mom and I headed down to the river bottom to collect some wild grass and Sorghum to cut and take home with me. It’s so pretty down there, I love it all, minus the spiders that are large enough to eat a mid-sized sedan, those I could easily live without. Sunday dinner was spent eating and laughing with my family. All ages are represented there, from 75 years to 2 months old. Those dinners are so much fun and they’re something I’ll treasure forever. Besides the delicious food, there are a couple things I can always expect, without fail: iced tea to drink, and at least one conversation about someone who has recently died. My rule of “no death conversation at the dinner table” has clearly been completely ignored, and that’s fine. Who am I to make rules?

After eating way too much, we headed in to watch my little cousin’s volleyball game. Those 4th graders have more skill than I did as a senior in high school, and I think I deserve some sort of prize for admitting that. 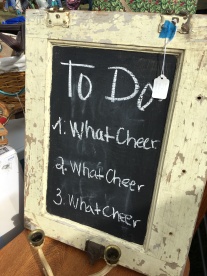 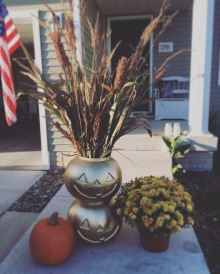 We headed home shortly after, and I spent the entire 2 hour drive thinking about how I could properly present my wild grass and sorghum I picked on the river bottom. I had the perfect, most beautiful basic idea in mind, and it was going to be *simple* to execute. Seriously, this shit was going to make those Pinterest models with their skinny little leggings and perfectly fluffed scarves army green with envy. Per usual, the joke was on me, because two hours, 3 drill bits and 16 F bombs (1, maybe 2 in the presence of a poor family trying to enjoy a leisurely Sunday stroll) later we finally got it finished. Who doesn’t enjoy some spousal team building on a Sunday afternoon? THE EDDIES, THAT’S WHO.

Lets be honest, dropping 2 curse words per minute for 2 hours can really contribute to working up an appetite. And since it’s fall and I’m queen BAE-sic now, supper was not going to be our usual frozen pizza or quesadilla. Oh, no. Supper was going to include sweet potatoes and cheese and all things fall. Supper was going to taste like Martha Stewart took 30 minutes out of her Thanksgiving episode to stop by my home to cook a meal in my kitchen. And that’s exactly what happened. I shook off all of the frustration of my crafting mishap, washed the gold spray paint off of my hands and got my shit together. I whipped up the most delicious ground turkey and sweet potato skillet, and just like that, all was well. It was certainly tasty, and a great way to close out a perfectly lovely weekend. I hope you’ll give it a try sometime!

Add garlic until fragrant, then add turkey – cook for about 10 minutes

While cooking, preheat oven to 400 degrees

Once potato is tender, add cheese and move to oven to melt

When it’s melted to perfection, remove and serve.

I have three kids! How am I supposed to remember ALL of their birthdates?!
A Holly Jolly Hot Mess, if you will…
Who else?!
I am pretty bad 💅🏼
Looking back I know mg mom wanted those crackers and she gave them to me anyway. Because that’s what moms do. They sacrifice their bodies, souls and crackers. Thanks, mom.
Focus? Who’s she?